Dow Great Stuff Not so Great 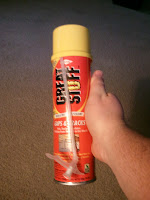 As a nearly full-time landlord, I usually stock up on products I use often, ranging from shower heads to caulk to...Great Stuff.  Well, I won't be buying that last one anymore.  Not until they do the right thing.  Bet you didn't know the product features an expiration date, did you?  Neither did I.

Some time last year I purchased several 16 oz. cans of Great Stuff.  One of the last items on my list for rehabbing House #9 was to plug a couple gaps around one of the outside doors.  I had brought two cans with me (all part of my rehab kit), both of which were defective.  It sounds like there is product in the can, but nothing comes out.  Then the threaded top broke off when I was pushing down on the nozzle.

I called Dow to find out if there was a way I could still use the product, but when the lady at 866-583-BLUE said there was not, I asked her how I could go about getting it replaced.  These were two brand new, sealed cans.  She asked me to read the date on the bottom of the can.  That's when I realized this Stuff has an expiration date.  Who knew?

Long story short, DOW refused to replace their product.  The product which I didn't get to use.  You know, milk has an expiration date, too.  But that date is featured prominently on the jug, not hidden away on the bottom.  And, common sense tells you milk will expire.  I think it is unreasonable to expect the average consumer to know that this product becomes completely unusable after the date that is hidden from view.

That's too bad.  I've used a lot of DOW products in my properties.  But I refuse to buy products from unethical companies.  Until they make things right, they won't see another dime from me.
posted on 9/27/2011