My Experience Sleeping in My Car

Monday night I slept in my car for the first time.  It didn't make economical sense to stay in a hotel, plus I'm stubborn.  Originally I had a trip planned which included an overnight stay in Birmingham with my mom.  We've never been on the best of terms and because I do not wish to detail the story here, I will just say that my plans to spend the night at her house fell through a few days ago.

When my plans changed I did look at hotel rooms, but the least expensive rooms were $50 per night.  I also looked at redeeming loyalty points but even that did not appeal to me.  Why redeem 25,000 points for a place to lay my head for a few hours when I could save them for a frugal vacation?  Then I started thinking,

What's the worst that could happen if I slept in my car?

I did some online research - where to park my car, how to make the car more comfortable, the risks involved.  What I found was that truck stops and Wal-Mart parking lots were overwhelmingly favored by folks who do this thing regularly. Based on my research I decided to fold down the back seat so that I would mostly be sleeping in the trunk of the car.  I just couldn't imagine sleeping in the front seat or snuggled up in the backseat.  I drive a Toyota Corolla; it's too small for that.

I shopped five gas stations Monday night on my way from the Atlanta conference to Birmingham.  At the last station there was both a McDonald's and a Wal-Mart in the same parking lot.  This was my spot.  I hung out in McDonald's while I entered my shops and surfed the Internet, then I pulled into the Wal-Mart lot behind the restaurant.  Logistics were straightforward:  I brought two comforters, three pillows and a sheet.  I folded down the backseat, draped the sheet above stretching across the folded down area to conceal myself from prying eyes and shield some of the lights, and made myself a bed.

It wasn't the best night's sleep I ever got, but I didn't expect it to be.  Fortunately the weather was perfect.  I prefer cooler weather when sleeping and it was about 65 degrees when I fell asleep.  But still, I saved $50 or more and didn't sacrifice much if anything.  This wasn't such a bad experience.  I had a day of mystery shopping to do when I woke up, so I freshened up in the McDonald's bathroom and began the day.

Sleeping in my car turned out to be a frugal adventure, and I imagine I will do it again if the circumstances are right.  I wouldn't recommend it if you have to be dressed up the next day or in a very public setting because taking a bird bath at McDonald's won't cut it, at least for me, and this wasn't the most comfortable sleep I've had.  It's probably something that takes a little getting used to.  For example, I woke up several times and I think it was more out of anxiety than actual noises around me.

Journey to a Healthier Me: First 30 Days 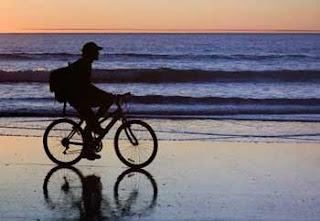 One of the two reasons I moved to Florida was my desire to lose weight.  Back in Alabama I was stuck in a rut, unmotivated and unhappy with how much weight I've gained in my adult years.

Shortly after arrival I bought an inexpensive, single-gear bicycle from K-Mart.  I didn't want to invest a ton of money until I was sure I would stick to my plan to ride my bike just about everywhere.

I've been using the bike.  In fact, unless I am out mystery shopping, I almost always choose my bicycle over my vehicle.  Even better, I have lost nearly 10 pounds this month.

What an epiphany.  I kept questioning whether I was just making another excuse for being unhappy when I told myself I needed to move somewhere different in order to bring on this change.  Back in Birmingham, I was too discouraged: 1) living in the same area for 35 years means nothing is new - there was no excitement about exploring because I already knew where everything was; 2) back in Birmingham there were no sidewalks outside my neighborhood, and there certainly were no bike paths.  At least not in the suburbs.  In Clearwater, we've got this wonderful 30 mile bike path called the Pinellas Trail.  I can throw a rock from my house and hit it - it's that close.  And many of the roads have bike lanes.  Additionally, it's easier here to stay off the busy highways that are too dangerous.

Lesson learned:  drastic times call for drastic measures.  I'm absolutely certain I am on my way to better health, and I know it took moving 500 miles away from home to force myself to embrace these necessary changes.

With the Atlanta conference in the bag, I traveled eastward yesterday afternoon, touching down in Savannah, GA.  Tonight we are attending our first Elton John concert.  It's neat that he is on a 5 town, small venue tour as nothing beats the intimacy of seeing one of the legends of music performing in a room with fewer than 10,000 fans.  As the concert sold out quickly, our seats aren't in the most desirable area, but then again, how undesirable can they be in a smaller setting such as the Savannah Civic Center?

Tonight I am also mystery shopping a hotel.  It's an easy hotel shop.  I needed a room for the night anyway so why not a free one?  This will give us the chance to park for free and walk to the concert from our hotel... it's that close.  Plus I hear Savannah is a happening little town.
posted on 9/15/2012 No comments:

Maybe Not Such an Easy Week

Plans for the week changed.  I woke up in Atlanta this morning after a grueling drive last night that got me to my hotel at 1:30 in the morning.  I am working a booth at an oncology conference instead of the meeting I was originally scheduled to do in Orlando.  The pay is much better, which is why I accepted the offer.  Atlanta isn't exactly on the way to Savannah, but since we were already planning to be in Savannah this weekend I guess I'm a bit closer now.

The conference I am working is this afternoon, all day tomorrow and Friday morning.  From there we will head to Savannah for the weekend.  The Elton John concert isn't until Saturday evening, so leaving from Atlanta on Friday afternoon means we can spend the day Saturday exploring the sites in historic Savannah, Georgia.

I plan to write more about doing conference work.  It's a nice way to make extra money.  I don't know exactly what I'll be doing today, but the money is good.  I have to wear a suit (ugh!), but being around a bunch of doctors shouldn't be too tough.
posted on 9/12/2012 2 comments:

I'm glad the weekend is over.  As someone who fulfills his commitments even when it's extremely inconvenient, I drove to Birmingham and back to complete a merchandising route I forgot to cancel.  It was 17 stores and the pay was decent enough that I don't feel too bad, but it wore me out.  In total I drove nearly 1,500 miles in 3 days.

This week is much easier, and more exciting.  Tomorrow and Wednesday I am working half days at a convention at a Disney hotel.  I've signed up for a couple mystery shops in Orlando to help justify the travel.  On Saturday we are driving to Savannah for the Elton John concert.  I'm shopping a hotel so our lodging is covered.  Hopefully we can complete some shops over the weekend to make the trip worthwhile.

Other than that, this will be an easy week.  I plan to get some exercise using my new bicycle.  Mystery shopping will be slow this week, but I have 25 gas station audits to complete next week.

August was expensive.   Most of the large expenses were move-related:  starting new utilities required hefty deposits, and I spent quite a bit on gas to get everything down here.

On the business side,  I spent over $3,000 repairing my rental properties.  Most of this was because I was getting three of the properties ready for new tenants, but I did have an almost $600 air conditioning repair.

Considering everything else that was going on last month, I earned a satisfactory income in August.  My rental income was about where it should be considering one of my tenants had already paid his August rent and is therefore not included.  I also had to kick out one of my tenants, but fortunately I found a new tenant before the month was out.  Mystery shopping income was quite good, but much of that was earned in prior months:

I'm starting to like my new home.  Last week we bought bicycles and I am absolutely loving it.  Because Pinellas County is so dense, I am finding most everything I need can be had without moving the car.  In fact, I have only had to drive to do mystery shops.  There are two libraries within 3 miles, several grocery stores, restaurants, Wal-Mart, K-Mart and much more.  I have already begun losing weight.  Soon I'll start posting updates on my weight loss if I can keep up the momentum.

I haven't been posting often because I still haven't signed up for Internet service.  Between the libraries, McDonald's and Starbucks, I'm never more than a mile away from a connection.  Today was the first day I had shops to enter.  The connection at the library is so much faster than what I used to have at home that I'm saving both time and money.

I'm still working on getting my feet more firmly planted in Clearwater and less so in Birmingham.  I have a merchandising route that I didn't want to give up that will bring me back this weekend.  I'm also working a conference in Orlando and one in Atlanta this month, and attending a concert in Savannah next week.  Guess I haven't quite given up the frantic pace.
posted on 9/04/2012 No comments: