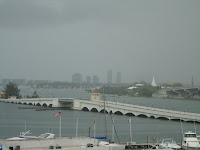 My shopping/vacation is going well. I've completed five of the six restaurant shops and two of the four hotels. Later this morning I will finish the third hotel and then tonight I check into the last one. The last shop is reimbursement only but the shop is much easier than the ones that pay me a fee.

scene from an overcast Biscayne Bay, taken from my hotel balcony

Much of my time has been spent working but it's the kind of work I really don't mind. I write my reports in the room. Wednesday night/Thursday morning I did much of my report sitting on an 8th floor balcony overlooking Biscayne Bay and the Miami Beach skyline. The actual work - eating, walking around a resort - that's not hard. The hardest part for me is keeping up with names, particularly when the employee doesn't even have a name tag and I have to ask for their name while not revealing my identity. I've gotten used to that now so I never worry about blowing my cover.

There's also some fun. I hunted down some sites from Dexter along Ocean Drive in South Beach. That's my favorite show - too bad I have to wait for the DVD of each series to be released. I also had my picture taken on the steps where Versace was killed. Later today we are going to drive by Enrique Iglesias' house - at least I think I have his address.

I've always thought you should integrate your passion with your work. It's not that hard to do when I am afforded opportunities such as these. Have a great weekend!
posted on 10/15/2010